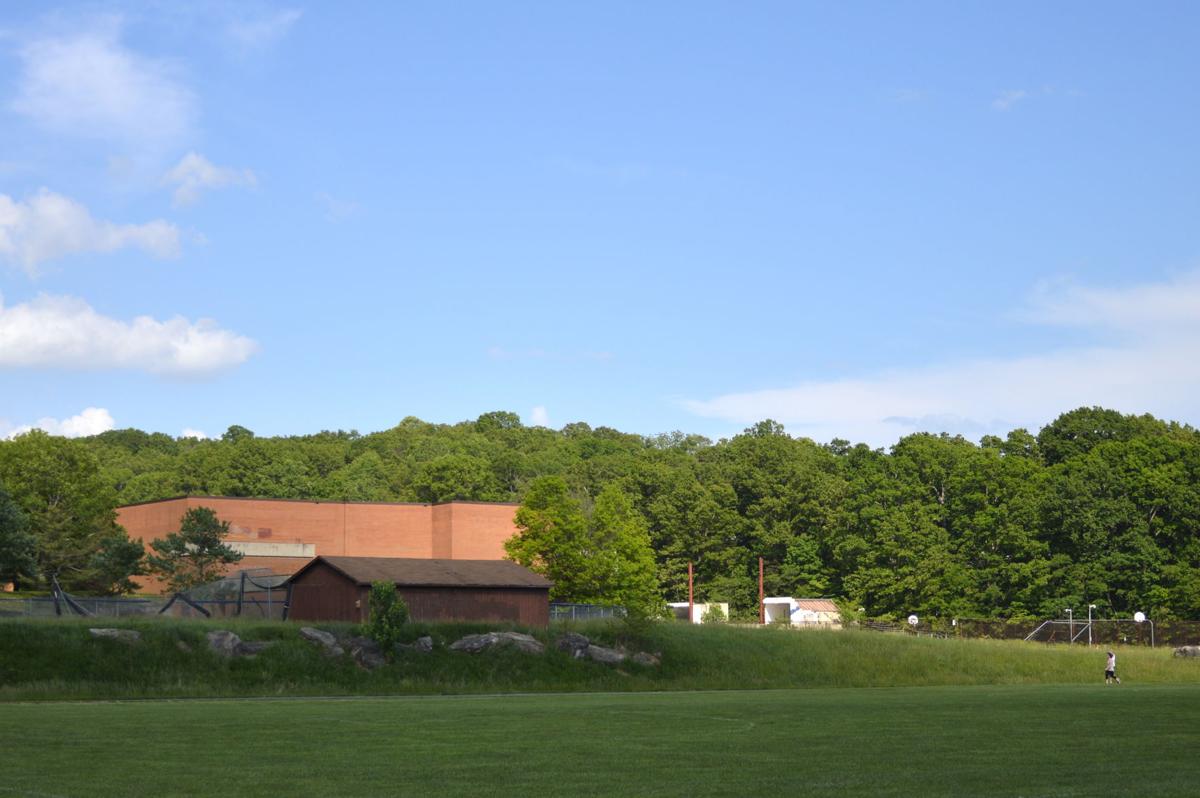 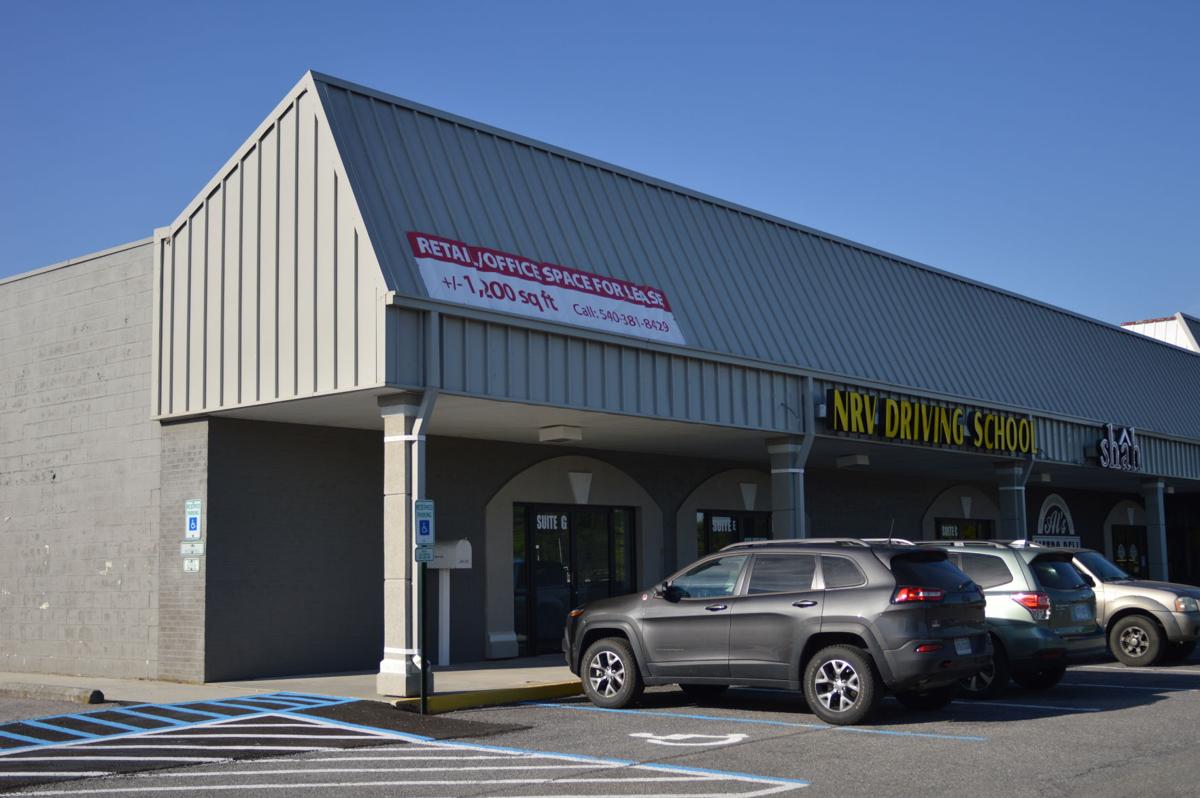 Suite G of the Gateway Plaza strip mall at 1655 Roanoke Street in Christiansburg, May 17, 2017. The Montgomery County Republican Party occupied the space in the months leading up to the 2016 elections. The office space was provided rent-free by Shah Development, which has an office two doors down from the suite. 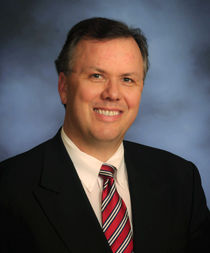 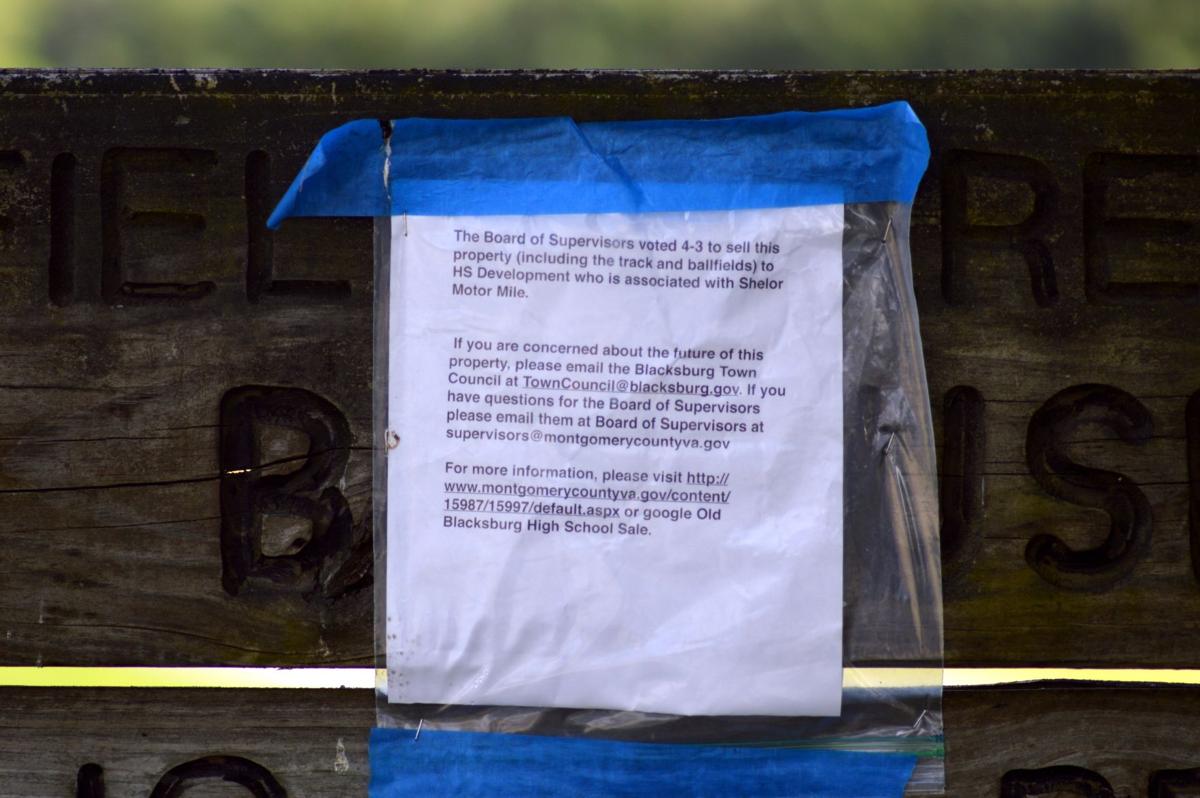 A note left on a sign near the track at the old Blacksburg High School asks people concerned about the sale to contact local officials, May 18, 2017. 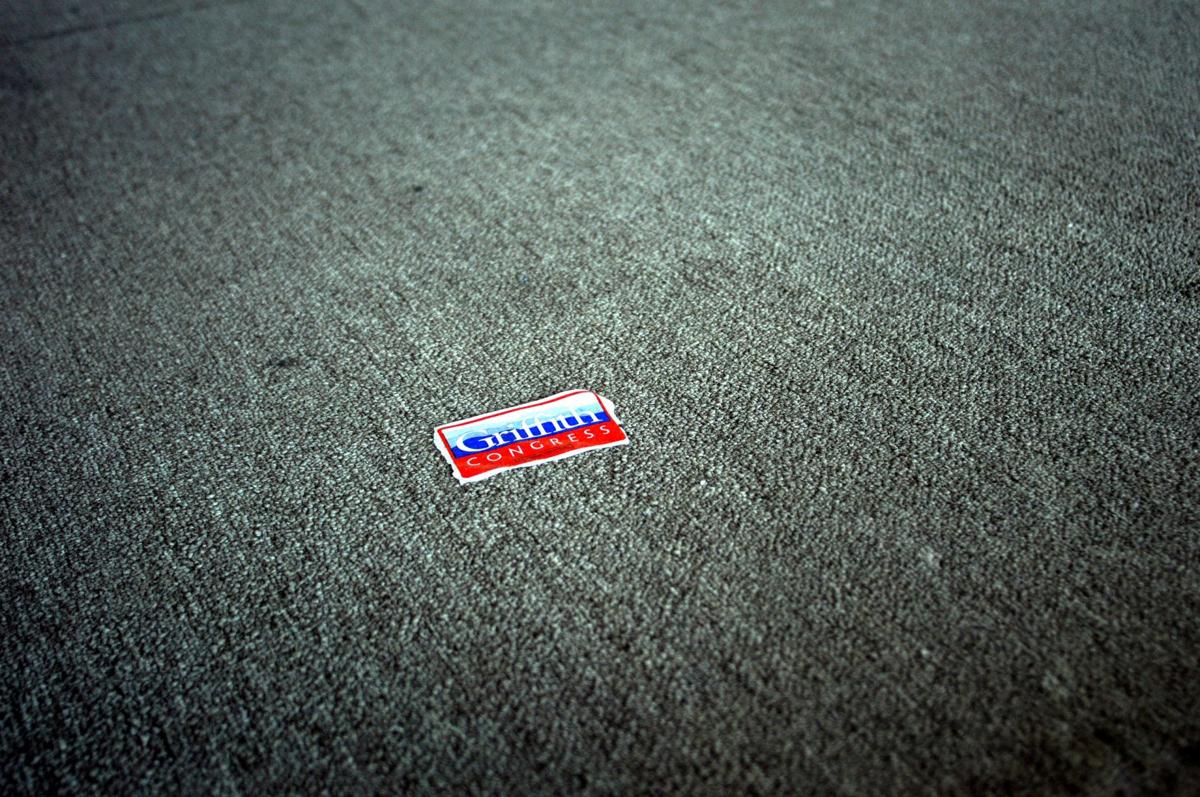 A sticker left over from Morgan Griffith's congressional campaign last year is still on the floor of Suite G, which was donated to the Montgomery County Republican Party by Shah Development, May 17, 2017.

The Montgomery County Republican Party received thousands of dollars in free rent from two Christiansburg business owners in the years leading up to a vote authorizing the sale of the old Blacksburg High School property to the same businessmen.

Republicans on the Montgomery County Board of Supervisors voted along party lines last month to accept a $3 million bid from HS Development LLC. The development firm is owned by David Hagan and Larry Shelor, two longtime Christiansburg business partners.

Hagan and Shelor, who were competing with the Town of Blacksburg to purchase the site, also own the real estate firm Shah Development and the automotive dealership Shelor Motor Mile.

Between September and November of 2015, Shah Development provided the Montgomery County Republican Party with $4,536 in free rent, according to campaign finance filings reviewed by the Collegiate Times. Reports to the Virginia Department of Elections show party officials paid a $2,000 deposit in early September, Shah retuned the money in mid-November. Reports also detail payments made by the party to Shah for utility costs.

Board of Supervisors Chairman Chris Tuck — who spearheaded the effort to sell the property —  said that the relationship between the businessmen and the party did not affect his vote. In an interview, Tuck said he was only generally aware of the donations.

“(The donations) didn't play any factor, whatsoever, in the decision,” Tuck said. “It’s pretty simple, (HS Development’s) bid was $3 million, the Town of Blacksburg's was $2.3 million. So, I went with the higher bid.”

The office space donated in 2016 was used as a campaign headquarters in the months leading up to the November election. A grand opening was held at the headquarters, located in the Gateway Plaza strip mall in Christiansburg, on Aug. 13, 2016.

“We ask (Shah Development) each year if they will donate some vacant office space and they either do or they don't,” Dickenson said. “We don't have a relationship other than that, that I know of. At least I don't, as the chairman. We don't promote any of their causes, they don't necessarily promote any of ours. They're just willing to allow us to use the space.”

The party, which does business as the Montgomery County Unit Committee, has yet to report the 2016 in-kind donation to the Virginia Department of Elections. It is absent from Schedule B of the three most recent finance filings, although the reports include various utility payments and a $1,000 deposit that was made Aug. 2, 2016, and returned Jan. 10, 2017.

To give an idea as to the fair market value of the space, a similarly sized Christiansburg office space in Foothills Plaza is listed on LoopNet at $1,250 a month. Dickenson said he did not know why the in-kind rent donation was not reported.

“Maybe because we hadn't paid anything, so you know, it skipped, you know, the attention of whoever,” Dickenson said. “There's certainly no effort to deceive.”

Hagan and Shelor have a long history of political donations. Hash Investments LLC — Hagan and Shelor’s company that owned Gateway Plaza before Shah — contributed $3,000 to two Republican delegate campaigns in 2001, according to the Virginia Public Access Project (VPAP). Also, according to the database, Shelor Motor Mile donated to political campaigns ranging from Jim Jones’ State Senate bid in 1999 ($2,500) to Montgomery County Supervisor Gary Creed’s committee in 2013 ($1,895).

The donations are not limited to Republicans however.

“In Pulaski, we donated $16,000 to Democrat Lane Penn,” said Hagan in a May 24 interview with the Collegiate Times. “We gave space to Mike Hines (a Democrat) for Senate and $6,000 in cash — in addition to free space.”

Creed, along with his Republican colleagues, Tuck, Todd King and Darrell Sheppard, voted to approve the sale in an April 24 vote. The three Democrats who make up the rest of the seven-member board voted against the sale.

Democratic Supervisor April DeMotts said she was previously not aware of the donations but is confident that nothing inappropriate occurred prior to the vote.

“I wouldn't jump to conclusions,” DeMotts said. “I wouldn't conclude that any kind of decision was made on the old Blacksburg High School property based purely on party lines. I don't think there's a connection between the vote that took place and their previous donations to the Republican Party.”

DeMotts said she believed the 4–3 split had less to do with partisanship and more to do with geography. The three Democratic supervisors represent most of Blacksburg, while only a small portion of western Blacksburg is represented by Republican Supervisor Sheppard.

The sale comes more than seven years after a snowstorm damaged the old Blacksburg High School, forcing school officials to close the facility and to build a new high school. A dispute among county officials impeded any action on the site. As the property remained in limbo, the school’s old sport facilities, located on the lot, remained open to the public.

The years of inaction appeared to be ending late last year after Tuck announced plans to seek a private sale when negotiations with Blacksburg fell through. The revelation touched off a flurry of controversy after town residents were upset to learn that Blacksburg would be losing a public recreational site.

Town officials had hoped to purchase the property from the county in an effort to create a more permanent recreational space, but a disagreement between town and county officials over the value of the site brought negotiations to a standstill.

In February, local developer Bill Ellenbogen proposed a compromise. He suggested he would buy the entire site for $3 million, donating part of the property to Blacksburg for recreational use and leasing the other part to Virginia Tech for storage.

The Blacksburg Town Council shot down the plan later that month over fears that rezoning the site for commercial use would disturb the quality of life of the largely residential area. However, a new contender had emerged.

On Jan. 5, 2017, HS Development LLC was registered with the Virginia State Corporation Commission. The business, which lists its address as Motor Mile Ford in Christiansburg, is a partnership between Hagan and Shelor that intended to purchase the property.

Hagan and Shelor initially proposed purchasing the property for $2.175 million, paying demolition costs except for asbestos abatement, on Jan. 5. They would turn over part of the property to Blacksburg for recreational space and use the remainder for single-family housing. Meanwhile, Blacksburg upped its offer to $2.75 million with partial demolition costs, but was turned down for not meeting the county’s $3 million minimum bid.

In a letter from Tuck dated March 3 provided to the Collegiate Times by Hagan, the county extended a non-exclusive offer to sell the property for $3 million. The letter includes a financing plan that spaces out $1 million payments between closing of the sale, 24 months later and 36 months later. An invoice from Hagan dated March 7 shows that HS Development made a $25,000 deposit to accept the offer.

After the public announcement of the sale on March 9, a letter that had been drafted by the town reached the county, according to the Roanoke Times. The letter offered to buy the property for $2.3 million and pay all demolition costs, beating the previous publicly known offer by Hagan and Shelor by $125,000.

Tuck refused to accept Blacksburg’s $2.3 million offer and argued that not accepting HS Development's $3 million bid would do a disservice to county residents. In an op-ed published by the Roanoke Times in March, Tuck wrote that his goal was to always “net as much money as possible.”

The non-exclusive deal that the county offered would have been available to the town, according to Hagan. Additionally, it was the county that counter-offered — HS Development did not send in a new bid.

DeMotts, who championed the town’s effort to purchase the property, said she was disappointed that HS Development was offered a payment plan that was never extended to Blacksburg.

“The Board of Supervisors negotiated the offer with HS Development that involved a payment over a term, so an interest-free loan with payments over a three-year period,” DeMotts said. “It’s unfortunate that the same offer was not made to the Town of Blacksburg. I think that could have changed the decision.”

The terms of the financing are laid out in Tuck’s March 3 counter-offer, which Hagan says would have been available to all bidders.

The Roanoke Times reported on May 12 that the New River Valley apartment developer Jeanne Stosser will join Hagan and Shelor to redevelop the 36-acre property. Stosser — the founder and president of CMG Leasing — gave $500 to the Montgomery County Republican Party in September of 2014, according to VPAP. A year later CMG Leasing also donated $1,000 to the party.

When asked about the relationship between Republicans on the Board of Supervisors, Hagan and Shelor, party Chairman Dickenson said he was entirely unaware of the decision to sell the old Blacksburg High School property.

“To tell you the truth I really don't know,” Dickenson said. “I do know that both of those men are very philanthropic, they've done all kinds of incredible things over in Pulaski.

“I expect for (party members in the county government), if they see me or some member of our committee do something that's inappropriate, I expect for them to indicate it to me and I will make sure we are following the letter of the law. Mr. Shelor and Mr. Hagan are nice people and more than likely next year we will be back to them.”

Editor’s Note: An earlier version of this article referred to the old Blacksburg High School as “condemned.”  The building was closed because of structural issues. HS Development is looking into potential uses of the building. HS Development’s initial offer was also initially included as $2.2 million including demolition based on a Roanoke Times story. This has also been updated.

After the publication of the story on May 19, David Hagan reached out to the Collegiate Times and provided documents that contradicted the initial account of the purchase of the property. The story has been updated to reflect statements from Hagan, who did not respond to initial requests for comment via phone before the initial publication, including a direct quote about his and Shelor’s donations to Democratic candidates. In the interests of transparency, the documents provided by Hagan are linked to in the story. A PDF version of the initial story can also be found here.