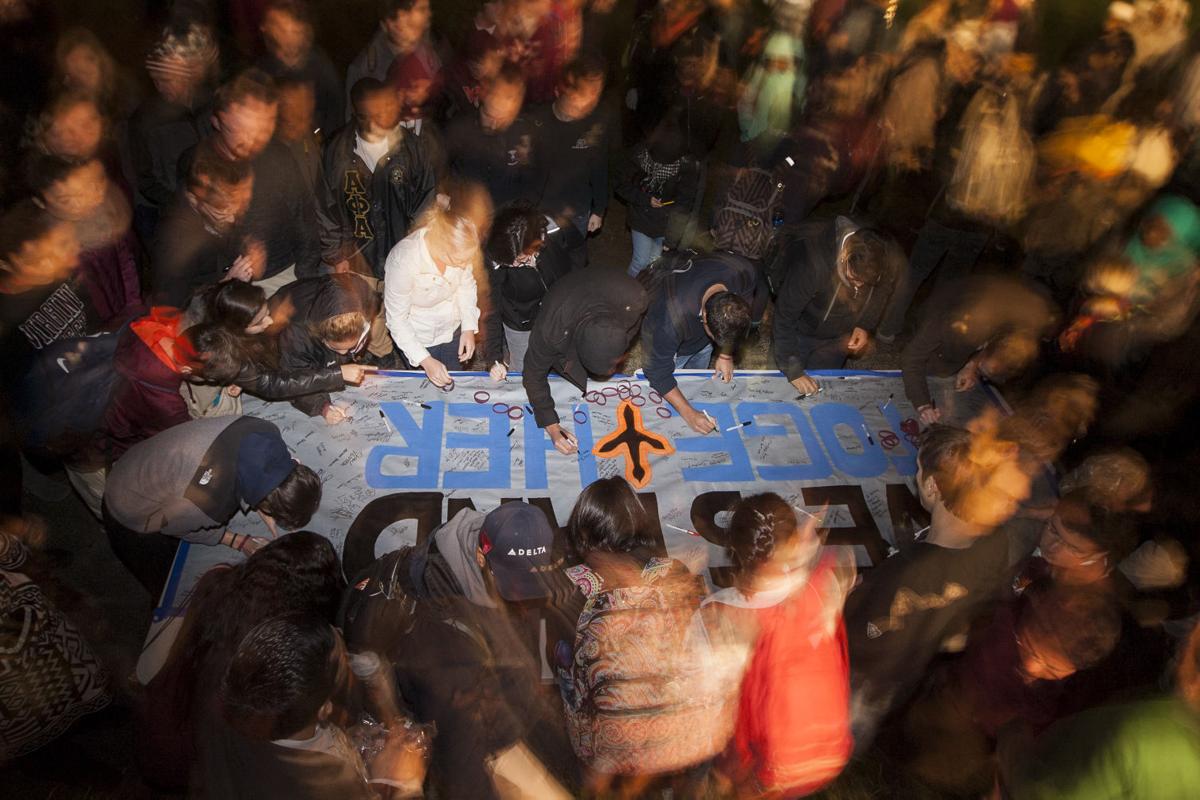 Students and community members gather around after the anti-hate rally on Nov. 10, 2015, to sign a banner stating "We Stand Together". 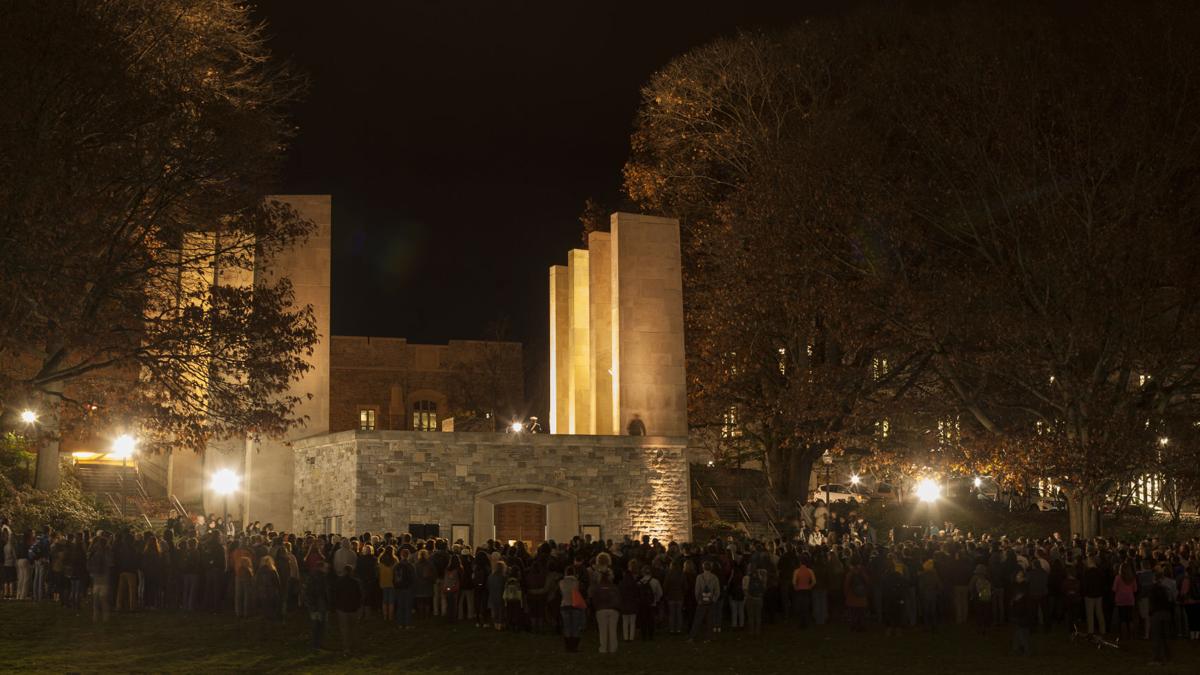 Students and community members attend an anti-hate rally on Nov. 10, 2015, organized after the threats made in Price Hall the week before. 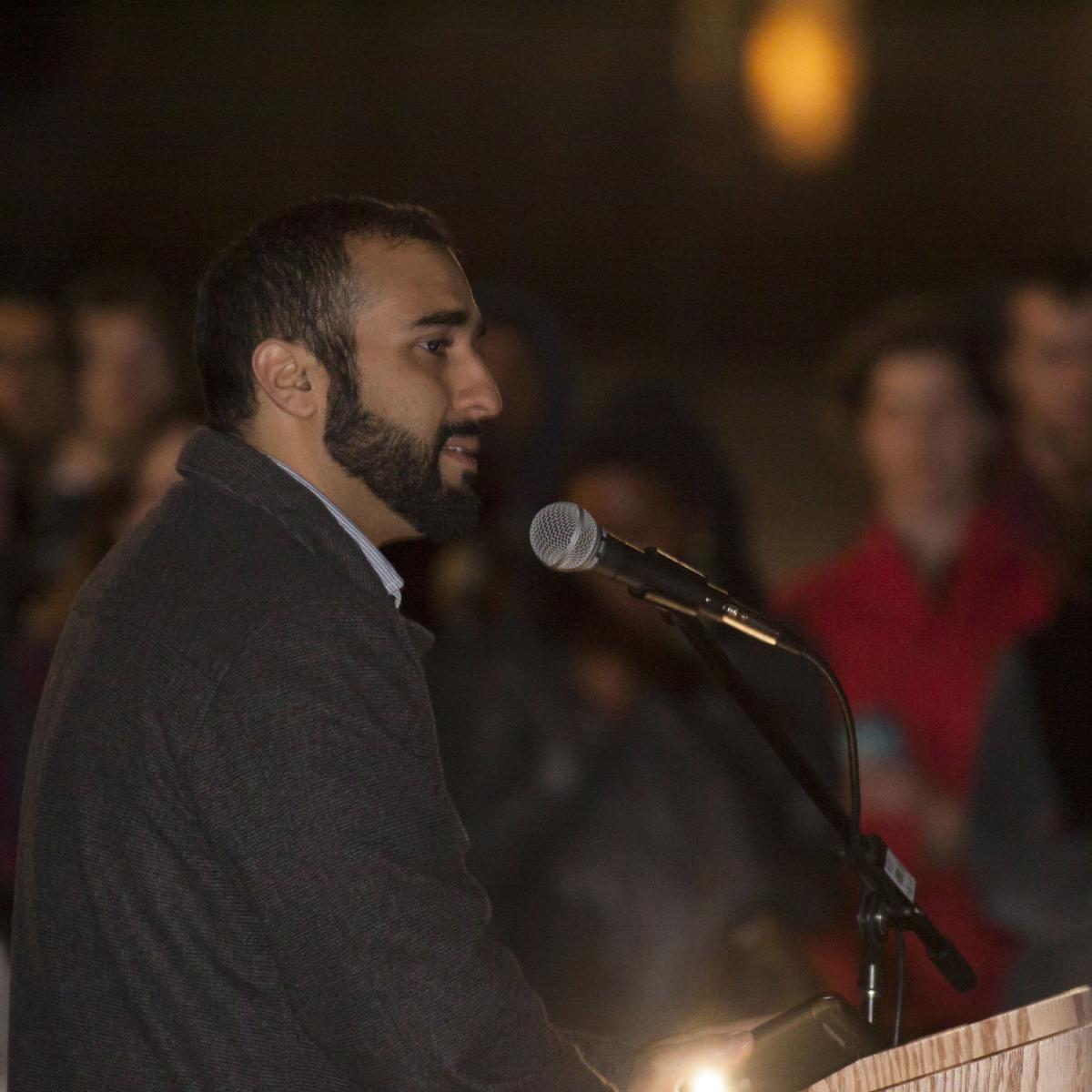 Students and community members speak during the anti-hate rally on Nov. 10, 2015.

The Muslim Student Association (MSA) held a demonstration of solidarity on Tuesday, Nov. 10 at 6 p.m. after a threat found on a bathroom wall last Monday.

Approximately 1,000 students, administrators and community members gathered outside War Memorial Chapel on the Drillfield for "Standing in Solidarity: A Gathering Against Hate.”

"I really like the emphasis that several speakers, including the president, placed on learning about people with different lived experiences,” said Frank Shushok, senior associate vice president for student affairs. “Developing true relationship and friendship across different lived experiences is a very tangible way for people to move forward and something that everyone can do — today, tomorrow — to help advance InclusiveVT, which is developing relationships and friendships across difference.”

Preparation for the event began last Thursday. In less than a week, MSA organized an event with full support from the university community, including President Timothy Sands.

"Frankly, I'm not surprised. When we've had challenges to our community, when people in our community feel threatened, Hokies show up,” Sands said. “It's just something that we do; we do it because we have experienced what it means to be a strong community and what we can learn from it, and we know that we need to be there to support each other.”

Students, administration and all attendees shared witness to the strength and dedication of the Hokie community.

"There have been so many times that I've been here that I've seen the Hokie community come together, and it just reinforced the love and resilience that we really are a Hokie family,” said Sharrika Adams, associate dean of students and director of student advocacy.

Students of all years, majors, backgrounds, ethnicities and religions came together with different interests, but for one reason: as an expression of solidarity and support for Muslim students at Virginia Tech.

“This kind of stuff is what breaks down the community, so we wanted to come out and see how we can help rebuild that sense after it's been tarnished by the graffiti that some idiot decided to put up,” said Ashley Baboota, a senior hotel and hospitality tourism management major.

The event was held on Nov. 10, a day prior to the day specified in the threat. The idea for the gathering was not born as a direct response, but as an opportunity to learn.

“There was a lot of minority groups there as well, but it was nice to see a nice representation of everyone come out and help support, and going forward, being more aware of some of the things they talked about up there just helped put it in perspective, like different people stories, especially hearing people who might not be going to classes tomorrow and how that affects their experience,” Baboota said.

“This is just the first step: we're all coming together, we're all showing that differences won't divide us, but they strengthen us and we are one family,” Khan said. “The fact that this is how we all respond is something that really touches my heart and gives me a lot of hope.”

Members of MSA and the University community had confidence and commitment in the continuation of the movement of solidarity and inclusivity.

After the closing remarks by Khan, he asked those in attendance to come together and sign a banner in a demonstration of support for the Muslim community.

Both the size and diversity of attendees inspired members of MSA, and provided a sense of safety and security for some, even on their own campus.

“The quick response was really amazing actually, and it was nice to get this amount of response, this amount of people to stand with us and understand how it might feel to get this type of threat and then try to be singled out of a community you've always felt a part of,” said Mehak Khokhar, a senior biology major and member of MSA.

The speakers explained hate as ignorance and encouraged interaction with other people as the solution.

"It gives me hope: hope that there is room for change and hope that we can actually come together, not only in times of mourning, but in times of action,” said Fawad Mohammad, a senior civil engineering major and vice president of MSA. “Seeing this and seeing the outcome and seeing the students who came out in the cold, it makes me happy that we are all one nation and one family.”

The crowd was comprised of diverse identities, all members of the Hokie community.

"I think it's really important to be here to show support,” said Sarah Busch, a sophomore civil and environmental engineering major. “We're all Hokies, regardless of religion, ethnicity, race and we need to stand up for what we believe in.”

Not all students who believed in the movement were able to attend. Despite absences, the crowd was sizeable, and stood unified and unbreakable, representing a community with the potential and commitment to change.

"Even though we are the targets, there are other groups out there, people in particular too, that come from different backgrounds,” Khokar said. “I think going forward means that we all stand together, accept our differences and just learn to make this world a better place.”