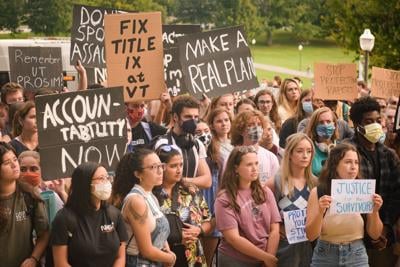 Students gathered outside the front steps of Burruss Hall on Sept. 28, 2021, to protest the recent rise of sexual assault cases at Virginia Tech.

This protest was organized by the United Feminist Movement at Virginia Tech (UFM). They gathered a crowd of nearly 50 people, many holding signs that read, “How can I call VT home when I don’t feel safe here?” and “No Means No.”

“Our goals today are that the university addresses sexual violence at Virginia Tech with creating a comprehensive university-wide plan…” said Carolina Bell, president of the United Feminist Movement at Virginia Tech. “Usually they kind of give the same resources of Women’s Center and Title Nine, but we recognize that sexual violence is a pervasive issue. It impacts all areas of student life.”

UFM wrote a letter to President Timothy Sands, Vice President Frank Shushok, Vice President Menah Pratt-Clarke and Dean Byron Hughes outlining its previous efforts to make lasting change at Virginia Tech as well as its demands for the future. The letter requested that the administration must “recognize the patterns of sexual violence and how different demographics within the community are affected,” as well as “create a comprehensive university-wide action plan to address sexual violence while committing to accountability and transparency.” The letter can be found here.

“We are demanding more education — mandatory education — not just online classes where people joke about them after they’re done,” said Ria Garg, a member of UFM at Virginia Tech.

UFM led the crowd in a series of chants, including, “Education and transparency, listen to us and you will see,” and “Hear this, we’ll resist.” Cheers were heard from the crowd as Bell and Garg voiced their demands from the letter.

“It’s not fair that I saw two people who assaulted me going to class,” said Elizabeth O’Brien, a junior management major and also one of the women who shared her story at the protest.

After the members of UFM finished voicing their requests, they invited anyone from the audience who wanted to share their personal stories to come up. Upwards of 20 people rose to share their own experiences with sexual assault — before and during their time at Virginia Tech.

“When people do these things, they take a piece of somebody away from them and they don’t even realize that,” said Amya Matthews, a sophomore smart and sustainable cities major and participant in the protest. “You’re walking down the street, and you see your perpetrator right there … It's traumatizing. You have to live with that, and you don’t feel safe.”

UFM is determined to continue its protests until visible change is made at Virginia Tech. UFM wrote in its letter that its members are “listening to the concerned voices and is willing to meet with administration and work together with the greater Virginia Tech community to provide specific and measurable improvements.”