It isn’t surprising that the country has exploded into protests, but it is surprising how long it took.

The deaths of George Floyd and Breonna Taylor come after decades of police violence and centuries of oppression. Protests have broken out before, but this is something new.

Anyone familiar with international relations has learned that the United States is not known for its widespread protests, particularly after the anti-war protests of the Bush Administration failed. Labor protests are common events in many parts of the world, bringing out significant parts of the population, as are protests against political corruption and inequality. 2019 was a particularly big year for protests, reversing controversial policies and forcing out political leaders, as they did in Bolivia, Hong Kong and the United Kingdom. The U.S. had some strikes — which is a huge achievement for a country that has shied away from labor movements since the Cold War — but they didn’t bring out nearly as many people as other protests around the world, nor did they force institutional change.

The protests in the wake of the deaths of Floyd and Taylor are something entirely new and very welcome. Police brutality is too common, and the militarization of the police hasn’t helped. Other democracies do not face this issue like we do. Police here kill more people in a matter of days than police in England, Germany and Australia do in years.

"So many have died due to police violence that we cannot afford to remain silent."

Once the protests began, I knew I had to get involved. As a white woman, I have the ability to use my privilege to bring awareness to police brutality. Because of my race, I am less likely to be killed by the police, even if they perceive me as a threat. I can shield Black and brown protesters or be ignored long enough to document what is happening.

So far, I have attended two protests, one in Charlottesville and one in Richmond. The Charlottesville protest was relatively calm and uneventful. It lasted a few hours and police observed from a distance.

I was fully aware that the protests in Richmond would be dangerous. The only other protest I had been to with a large police presence involved getting thrown to the ground by the police while taking photographs. As someone with asthma, I knew this was not the best idea, but I also majored in political science, so good ideas are not my strong suit.

As it turned out, the protest was very dangerous. While the protest was still peaceful, the police began to shoot tear gas at the crowd. Nearly everyone made it away safely, only to be cornered by more police and tear gassed once more. After I was detained by police, I saw people with all sorts of wounds. One man’s face was covered in blood. Someone was taken to the hospital soon after they arrived at the police station. A woman had a seizure while waiting to be processed.

I don’t regret going, and I plan to attend more protests. Some of the people I was locked up with went right back out, but I had gone 26 hours without sleep and was still covered in tear gas.

It wasn’t the worst night of my life, but it was revealing. I had people texting me and thanking me for what I was doing, which seemed a bit unearned, as all I did was take some pictures and spend the night in jail. Other people were less impressed — my father included.

There is this narrative that people are going out onto the streets to see how much they can burn down. Some people seem to believe that nearly all of the protesters are violent thugs looking to trash their cities. And yes, these people do exist. I’m not going to deny that.

But there is a reason why people are rioting.

After so long of being silenced and told how not to protest, it is completely understandable that some people have had enough. Black and brown people are constantly being told that they are disrespectful for asking for equality, even when they do it through wearing shirts, giving speeches or simply kneeling.

However, most of the protesters are not violent, and it is the police that are more likely to initiate the violence. The worst I saw from protesters was a few people tagging the boarded-up stores. The police, on the other hand, started firing tear gas at a fleeing crowd multiple times.

This is why we protest. This is why your voice matters if we are to end police brutality.

Even though I fully support the protests, I don’t recommend that everyone attend them, particularly not the ones with a large police presence expected. Making your voice heard can be done without putting yourself in excessive danger. Sacrificing your life sounds noble on paper, but all it does is decrease the number of voices calling for justice. The protests in Blacksburg have been peaceful, so go to those.

If you do want to go to a bigger protest in a city, play it safe. Don’t go if you are allergic to tear gas or pepper spray. Even if you stay far away from the cops, other people around you might be covered in both. Tear gas especially can be felt blocks away from where it was deployed, and it hurts a lot.

If you want to support the protests but can’t attend, there are a number of different ways to help. Donating to bail funds is one excellent way. I was detained for committing a Class 1 misdemeanor for curfew violation, which meant that I didn’t need to post bail, but people who are arrested do.

Just spreading awareness helps too. Everyone who ventures out risks not going back home. When I was being detained by police, I had no idea what was happening, and it was terrifying. Thankfully, I had friends and family who knew what was happening and called the jail to make sure I was alright. Awareness is a good form of protection and means of holding the cops accountable.

All of us need to do something. Everyone has to choose a side. You don’t need to loot a Wells Fargo or burn a cop car to be an effective protester — just show up. So many have died due to police violence that we cannot afford to remain silent.

We need to take care of one another. As Hokies, this is something we are good at. We have a whole event for serving the community. Now is the chance to take the “Ut Prosim” spirit to the next level.

Now is the time to decide which side you are on. 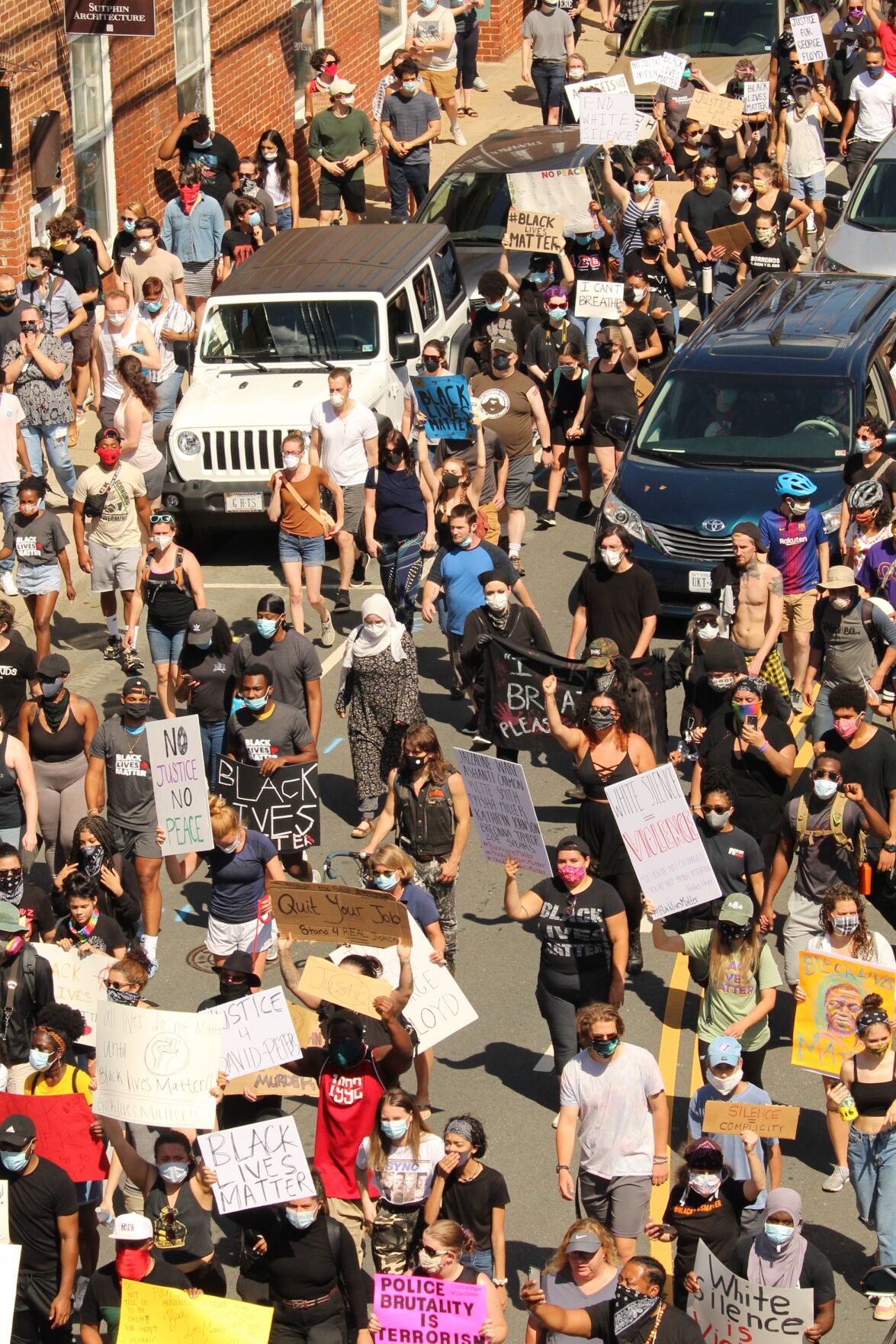 Protesters demonstrate outside the Charlottesville Police Department and on monument in Richmond, Virginia. 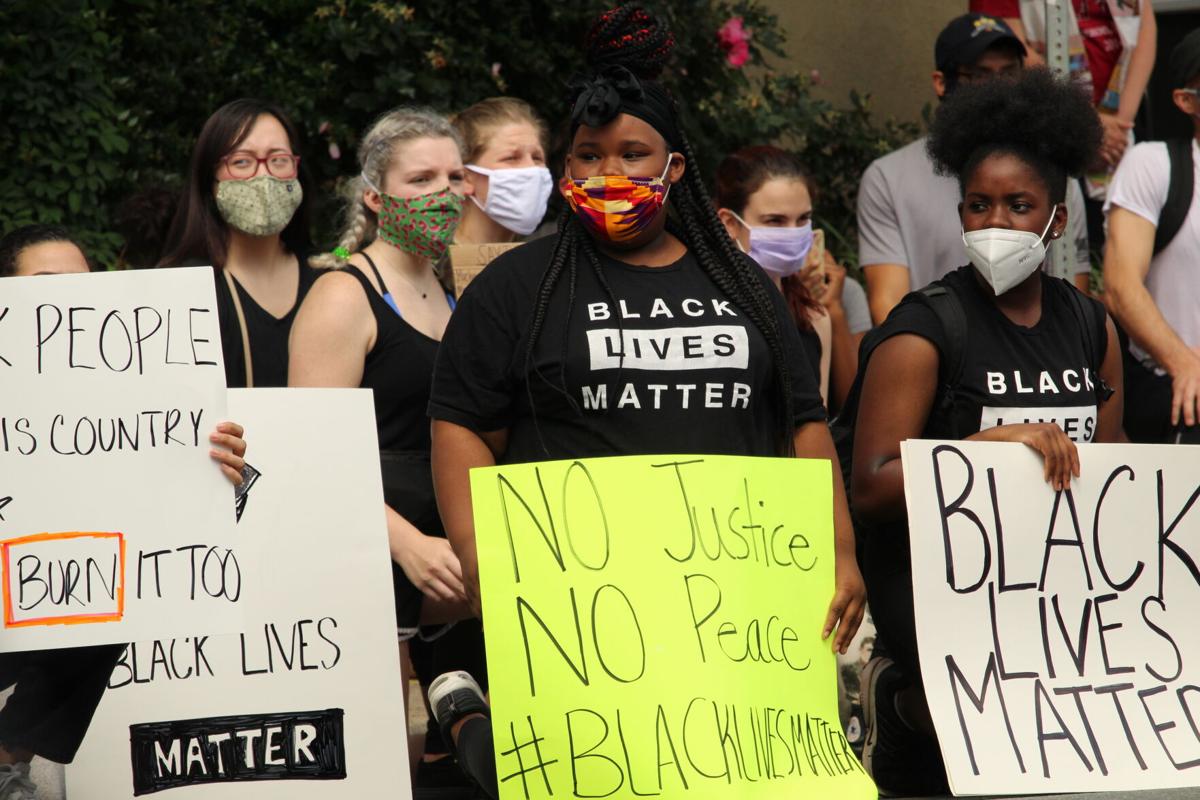 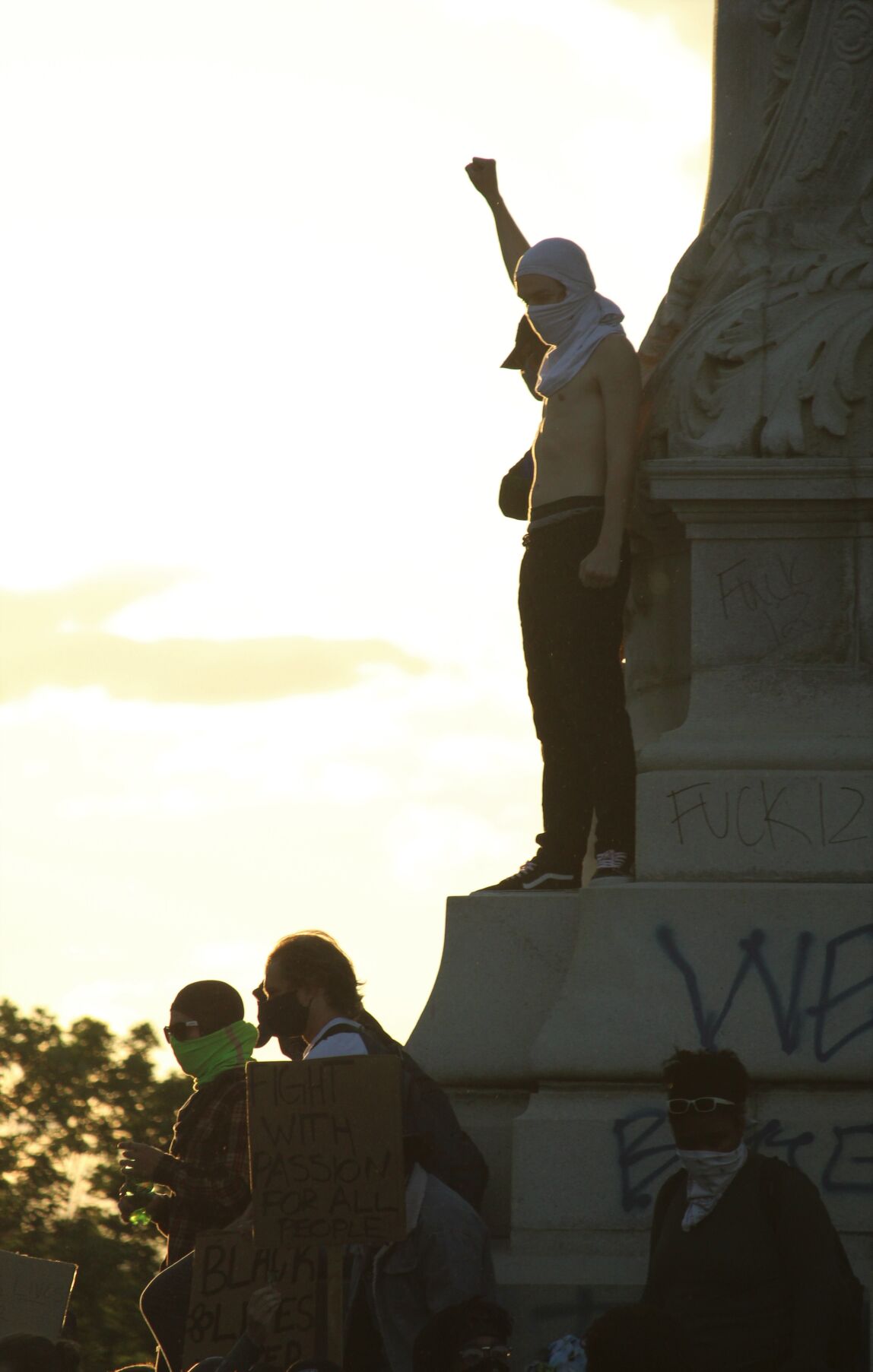 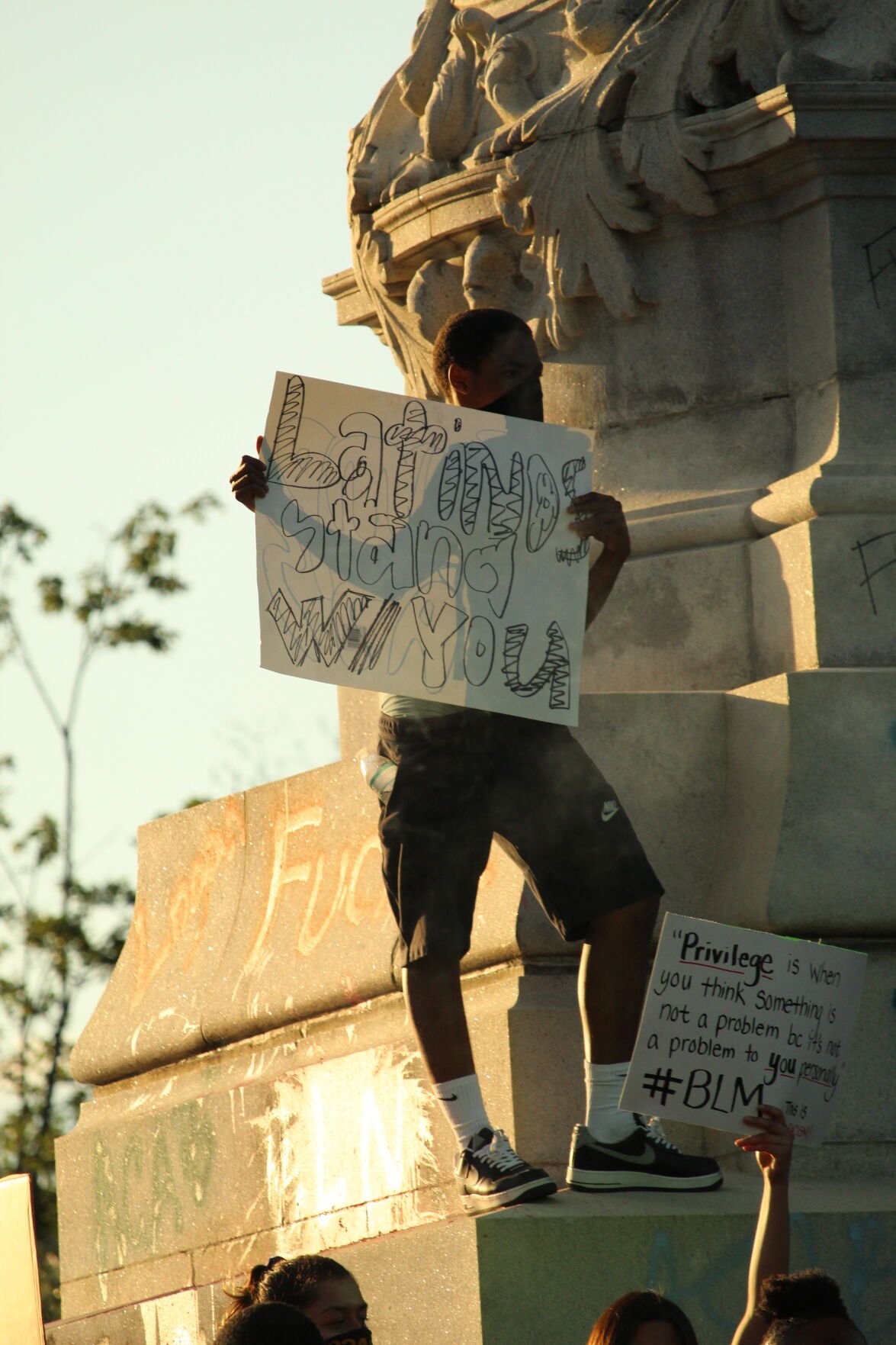 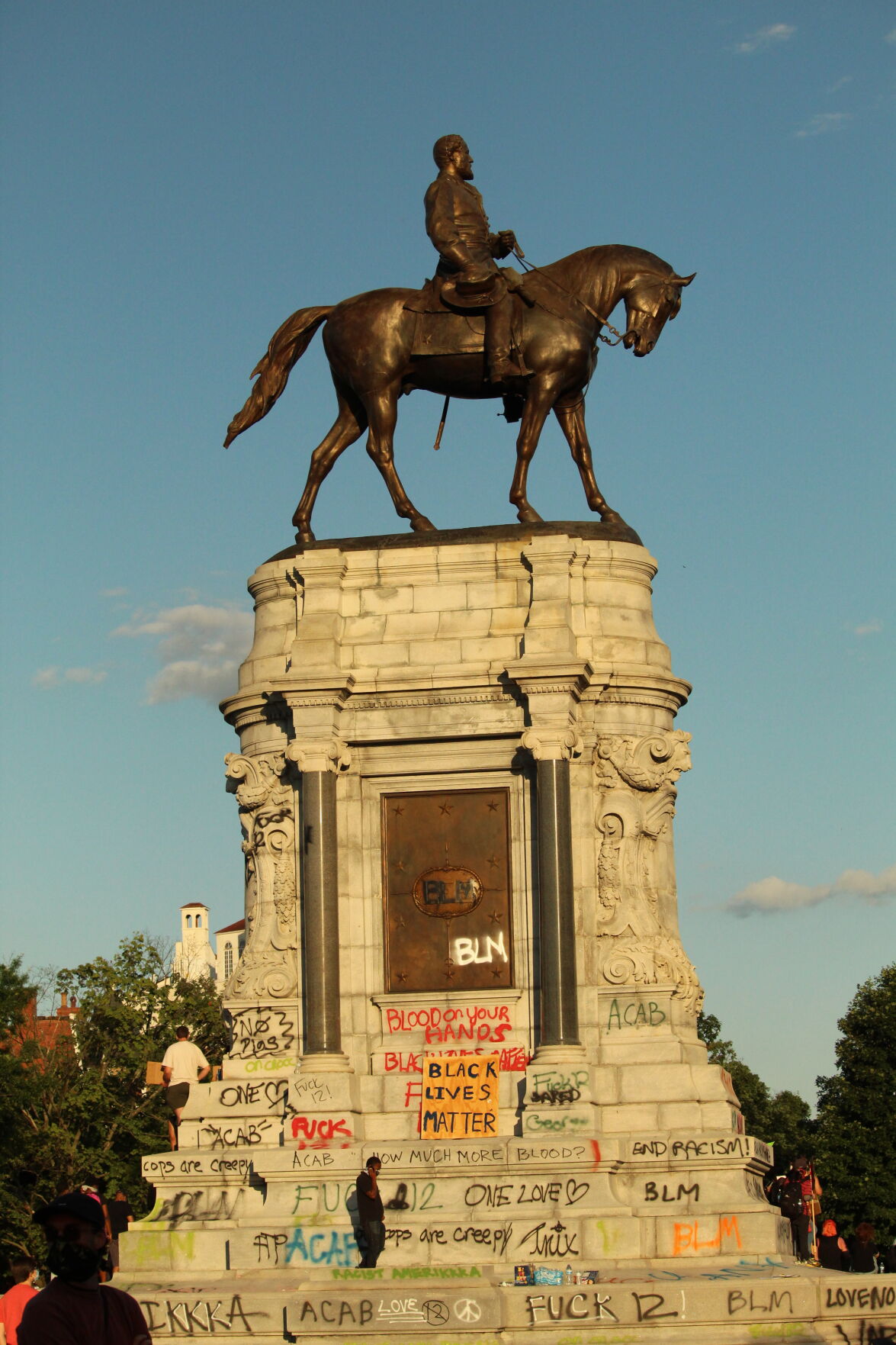 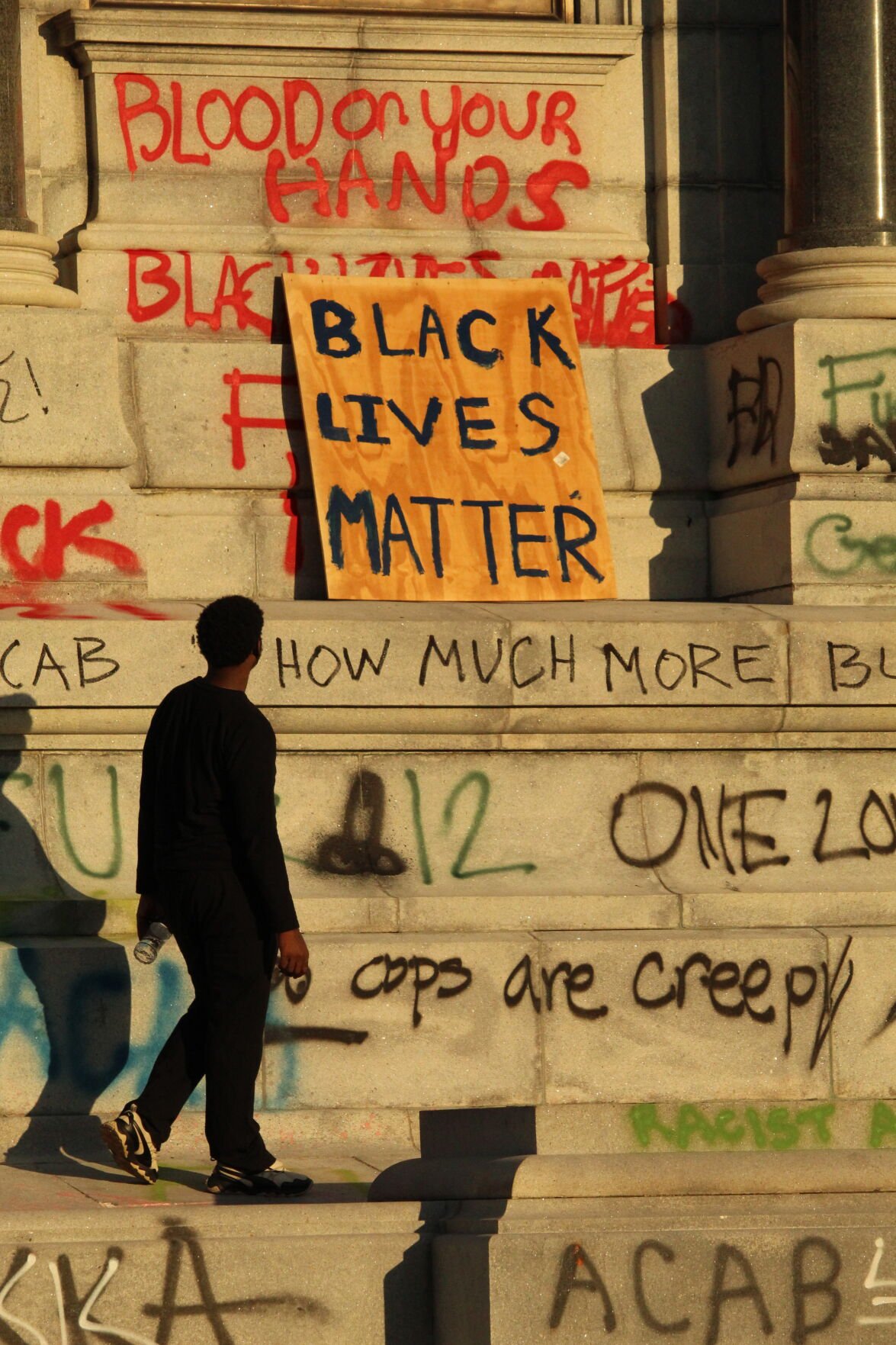 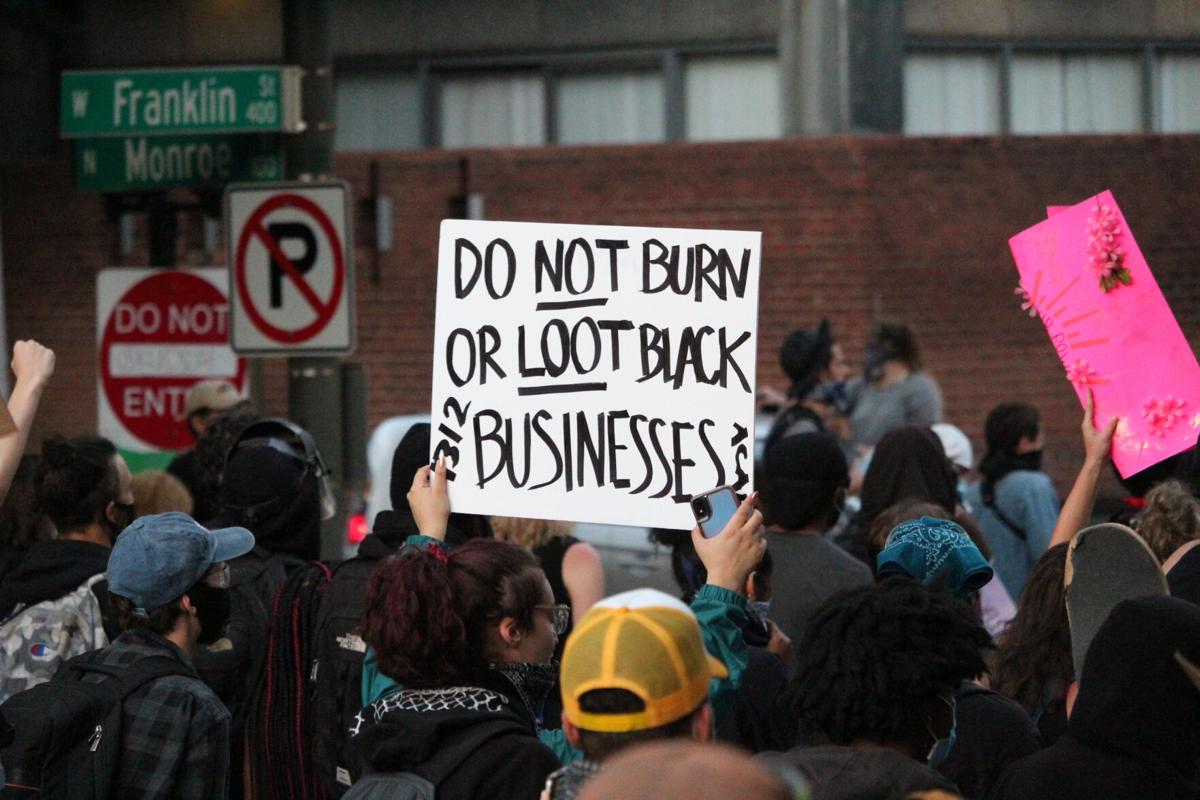 Protesters demonstrate outside the Charlottesville Police Department and on monument in Richmond, Virginia.

In the midst of uncertainty, Blacksburg Farmers Market remains a community staple